Mumbai: Suhana Khan and Shanaya Kapoor are in Dubai. The best friends recently attended a party in Dubai where Kendall Jenner was also present. That`s not it, they also clicked a picture with the supermodel! Shanaya shared the photo on her Instagram story.

As seen in the photo, Suhana looked glamorous in a light pink dress while Shanaya oozed charm in a red dress. On the other hand, Kendall brought her fashion A-game to the event in an olive-green dress, which she paired with latex gloves. Shanaya also revealed a peek of Kendall engaging in a conversation with some other guest from a table behind her. She posted it on her Instagram Stories with the caption “fun” and an emoji.

See the pictures and videos here 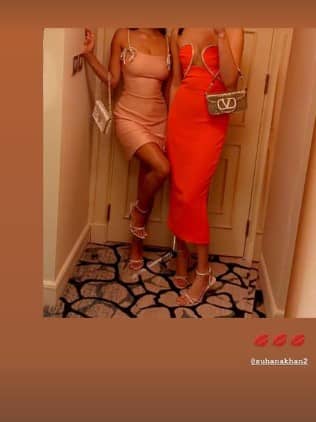 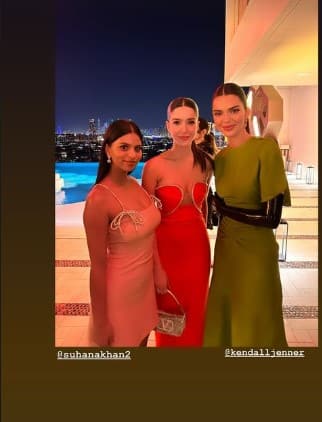 Talking about Suhana, she recently wrapped her upcoming movie `The Archies`. The film is the Indian adaptation of the iconic comics `The Archies` and will be released on OTT giant Netflix. Helmed by ace director Zoya Akhtar, `The Archies` is a coming-of-age story that will introduce the teenagers of Riverdale in the 1960s India.

`The Archies` marks not only the acting debut of Shah Rukh Khan-Gauri Khan`s daughter Suhana but also Amitabh Bachchan`s grandson Agastya Nanda and Sridevi-Boney Kapoor`s daughter Khushi Kapoor. Yuvraj Menda, Mihir Ahuja and Dot are also a part of the project. Shanaya, on the other hand, is all set to make her acting debut with Karan Johar`s `Bedhadak`, in which she will be seen essaying the role of Nimrit.

The film also stars Lakshya and Gurfateh Pirzada in lead roles. In March 2022, she announced the news on her Instagram handle and unveiled her first look from the film. The official release date of the film, however, is still awaited.