NEW DELHI: Superstar Suniel Shetty’s daughter Athiya Shetty and Indian Cricket Team vice-captain KL Rahul will reportedly get hitched in a close-knit ceremony on Monday (Jan 23). Even though the two celebs and their families have been extremely tight-lipped about their wedding, their fans can’t hold their excitement and are more than enthusiast to get every minute details of their wedding.

We recently came across photos and videos of the decked-up Khandala farmhouse of Bollywood superstar Suniel Shetty where the wedding ceremonies are being held. And now, a guest list of Athiya Shetty and KL Rahul wedding has been doing rounds on social media. As per reports, among those who have been invited to attend the wedding nuptials include B-Town biggies like Jackie Shroff, Salman Khan and Akshay Kumar. Akanksha Ranjan Kapoor, who is believed to be a very close friend of Athiya, is also expected to be a part of her wedding ceremony. 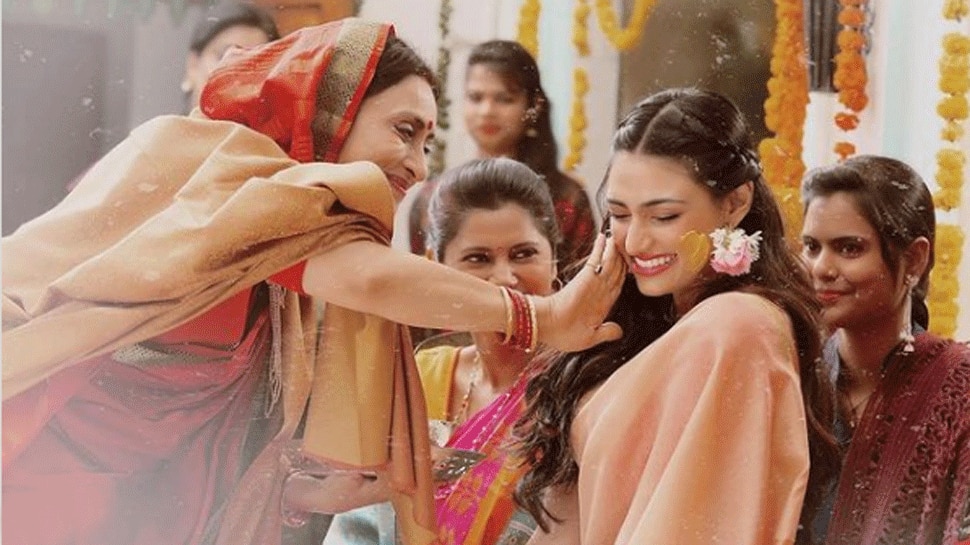 The wedding ceremony kicked off with a cocktail night at Suniel Shetty’s Khandala farmhouse on Saturday. While we still wait for pictures and details to come in from the wedding ceremony, we came across a throwback photo of Athiya from her film ‘Motichoor Chaknachoor’.

The picture shows Athiya shooting for a Haldi sequence with veteran actor Navni Parihar. Athiya looks extremely pretty in a peach outfit and is carrying flower petal earrings. Navni, who played her mother in the 2019 comedy-drama film ‘Motichoor Chaknachoor’, also starring Nawazuddin Siddiqui as male lead. Take a look at Athiya Shetty’s Haldi photo from her film, and looking at it, we are sure that the actress is going to be one awesome bride.

Reports state that there will be around 100 guests at the wedding and the couple has imposed a no-phone policy. Cellphones will reportedly be confiscated of all wedding guests during the wedding.

KL Rahul and Athiya Shetty made their relationship official on Instagram in 2020. Ever since the couple has been sharing mushy posts on social media and have put their online PDA on full display. If reports are to be believed, Athiya and Rahul were introduced to each other through a common friend at a party, and they hit it like fire. Four years after dating each other, the duo decided to take things to next level and are all set to be ‘husband and wife’.